Two advantages respectively two measuring functions based on x-ray technology are combined in one EcoScan NEO system. This is a “High Precision Area Weight Measurement” of the fiber mat and a “Foreign Body Detection”. Each measuring function can be created as a separate measuring system (stand-alone).

One of the most vital factors in the production of wood panels is the constant spreading of the material.

Installation location of the EcoScan NEO system is behind the pre-press. For the high precision area weight measurement two traversing measuring heads scan the entire mat width. Two x-ray sources are located underneath the mat. The belonging x-ray detectors move above the mat. Smallest deviations in the area weight can be detected thanks the use of the so-called MultiEnergy technology. The MultiEnergy technology is developed by EWS and unique on the market. During commissioning of the system, the forming belt is scanned without any material on the belt. As a result, influences of the forming belt are compensated in the later panel production. For the detection of foreign bodies (even non-metallic) x-ray radiates through the entire mat from above. The size of the smallest detectable foreign bodies depends on the type of material and the speed of production. By using EcoScan NEO the press belts are significantly protected. 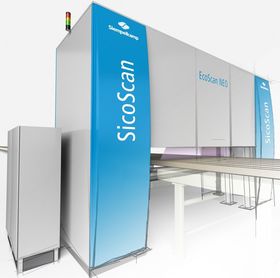 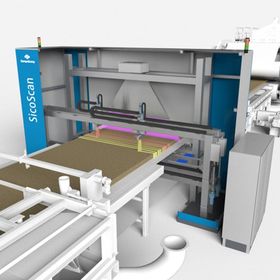 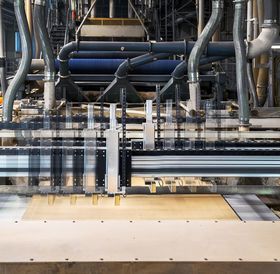 The EcoScan NEO - FLY measures the material distribution of wood fiber mats. For achieving high precision results during the commissioning of the system the empty forming belt is scanned and hereby weight distributions of the forming belt are recognized. The measured values are used to compensate influences of weight variations of the forming belt itself during the later panel production. Thanks for the forming belt compensation and thanks for the use of the MultiEnergy technology the EcoScan NEO – FLY shows the material distribution in a high resolution lengthwise and crosswise to production direction. The system also automatically adjusts the sensitivity and the measuring speed according to the produced area weight (Example: MDF mat of 2.5 m width and 60 mm thickness scanned in just 3 seconds).


for MDF, OSB, OSL and Particleboards

The EcoScan NEO - FBD is able to detect smallest foreign bodies in a fiber mat to prevent damages to the press belts. Foreign bodies are metallic or non-metallic pieces of material with high density (e.g. stones, plastic, resin lumps, wax balls, aluminum and steel). If a foreign body is detected a signal is given which can be used to automatically remove the part of the mat which contains the foreign body.

The smallest detectable foreign bodies depend on the wood material (MDF, Particle Board, OSB), the material thickness, the material density and the speed of production.